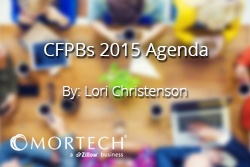 As a part of the federal government’s Unified Agenda of Regulatory and Deregulatory Actions, the Consumer Financial Protection Bureau (CFPB) is required to publish a semi-annual update of their rulemaking agenda.  Below are the major initiatives that will be addressed this year in the mortgage industry:

Many of the rules are being updated to align with existing standards which will assist in the enforcement and implementation of these rules.  The next update is due out in the fall.